FEATURED VARIETY
Apple ‘Honeycrisp’
This is not a traditional English apple at all, having been raised in 1991 in the U.S.A. It is one of the most popular varieties of all there and commands a very good price commercially, but it is only just being made available to UK gardeners.
The fruits of Honeycrisp are rather large, and predominantly covered by a shiny coppery red skin finish. The flavour is exciting; the flesh is dense and crisp, most satisfying to chew, and the flavour is sweet but not cloying as it balances just the right amount of zingy sharpness too. Although predominantly used as a dessert apple, it can also be baked or used for pies where it needs no sugar and maintains some shape when cooked.
Honeycrisp is good cropper and is pollinated by an mid season flowering variety; Spartan, Pixie, James Grieve, Charles Ross, Red Falstaff, Fortune, Redsleeves and Saturn have all been recorded as pollinating successfully with Honeycrisp.
Remember that the fruit of this variety can get to quite a large size and is quite heavy. In years of over-abundance some support to the branches may be necessary to avoid breakage.
Honeycrisp is outstanding on M27 miniature stock, or as a cordon. 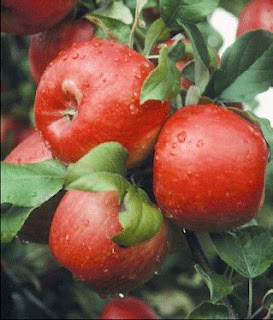