DUAL PURPOSE APPLES
-Poor relations or undiscovered classics?-
One of the greatest gulfs in Anglo-American attitudes towards fruit cultivars and apples in particular, is that of the dual purpose apple.
In the USA an apple is often considered inferior if it does not cook as well as eat. Yet in England such varieties are usually considered as neither one thing nor the other, or inferior on both counts. There isn’t a single dual purpose variety in our annual top 20 best selling apple varieties list. And there has never been a real dual purpose variety accepted and sold commercially in the supermarkets. In such times as these, when new potato varieties are being marketed on the basis of their dynamism, and given such economically troubled times when presumably a variety that can show it’s versatility would be a virtue, I think that’s astounding.
So who’s right and who’s wrong? It’s all down to perception, use, taste and history of course. England is virtually unique in that it prefers its cooking apples to be very sharp and flavourful. That’s why Bramleys has held it’s place as the Queen of cookers for so long. Yet in America, as well as much of continental Europe, the taste for cooking apples is for varieties that are sweeter and which will hold their shape when cooked. Very often dessert varieties are interchangeable. Part of this lies in favoured recipes - baked pies, tarts and flans that either rely on an apple that looks good when cooked or keeps it’s shape, or both. It is considered an advantage if it doesn’t need much sugar to be eaten. You can imagine, if presented with our very own sour Bramleys that promptly cooks down to little more than apple-soup, probably it would be considered itself as inferior!
The truth is I am inclined to think that dual purpose apples deserve more appreciation. There are several very good varieties that have both a fine flavour when eaten as dessert, yet also cook very well.
One of the prime examples is American Mother. So named because American mothers favour this variety for making their pies, it’s flavour when used for dessert is more than acceptable, infact it deserves the accolade of a delicacy. Aromatic and subtle the tender yellow flesh is imbued with hints of balsam, vanilla and pear drops. Let it develop too much and the taste does bland-out but caught at it’s peak it’s divine; almost a sacrilege to cook with it at all!
Idared is one of our more prevalent varieties yet it never sells in quantity. But it is particularly valuable because it hangs very late on the tree and will store with ease for months. This large, solid and vividly red apple is a fine sight on the tree. If you love ‘stewed apples’ lightly simmered and served with custard or cream [or both] then this variety is superb for it is both tender but keeps it’s texture as well. Not rubbery, and not sloppy. It has a delicately fine pear-like flavour. Later, when fully ripe, the texture softens sufficiently for it to make a fine, if rather large, dessert apple for use in the spring when nearly everything else has either been eaten or has gone off.
Blenheim Orange, and it’s near relative, Belle de Boskoop, are virtually always eaten for dessert in this country. The texture is quite dry and crumbly, to be frank I’ve never quite seen the attraction. Yet on the continent they are equally used for cooking purposes and evidently very good. Next Autumn I must remember to cook with some.
Honeycrisp is a relative newcomer, an American apple just making inroads here. It’s a giant sized apple, primarily recommended for dessert but maybe more suited to cooking? Certainly the Americans use it for both. When eaten fresh it is crunchy-crisp, sweetly honeyed but with a fine balancing acidity. It is however equally at home in a pie where it provides perfect chunks of nicely tender apple wrapped in the pastry of your choice. It also bakes very well I am told and doesn’t split it’s skin when in the oven.
Bountiful is the other side of the coin. Normally considered a cooker, and a very fine one, it is often sold because of the attribute ‘needs no sugar’ It is scarcely ever recommended for eating purposes yet that one sales phrase ‘needs no sugar’ really lets the secret out, doesn’t it. This is one shiny pale green apple that is as much a dessert as it is a cooking apple. The only reason it isn’t marketed as such is because it’s popularity might wane as a result. Bountiful is such a good variety either way; precocious, easily pollinated and a very good storing apple.
Lastly we come to Jonathan – another American type alas. It’s a deep deep ruby red shiny apple in the style of Spartan with a very sweet vinous flavour. One would think it the most obvious Apple for enjoying fresh yet in you-know-where it is equally used for baking.
There are of course a great many more dual-purpose Apple varieties, and several more besides where the characteristics are blurred to an extent where usage could become interchangeable.
When planning your Apple planting list, maybe now you will give thought and consideration to including one or two of those nasty dual-purpose varieties? Or maybe you won’t. Perhaps our tastes are too deeply embedded in the Great British apple psyche; just as much as an American mother would probably never consider using a horrid sour tasting and pulpy Bramleys Seedling in her pies….! 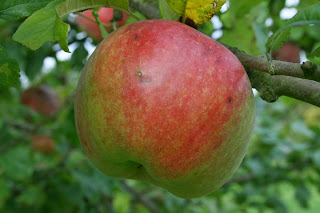