10] Tripod Raspberries!
The most space gobbling of the soft fruits and not easily accommodated in small spaces, but there is a growing method that can enable you to tuck some away in a spare corner, or even grow them in the flower border. It’s called the tripod method, and it involved planting 3 or 5 canes in a clump with 12” between them; the canes are then tied together at the top as they grow to restrict the space they take up and this keeps them neat and tidy. Resultant canes that appear near the parent canes are treated the same way and any that appear away from the clump are dug out. It’s quite a productive method considering the amount of space taken up, and well worth trying if you crave the summery taste of fresh picked raspberries. All varieties are suitable for growing in this way. You can even grow Raspberries in a border through an obelisk.
Any varieties are suitable but the more compact types such as Malling Jewel Zeva and Autumn Bliss, plus the spine ones that are easier to handle are obvious choices.
So Raspberries are a bit more accommodating and versatile than you might at first have thought; don’t try growing them in pots however. They might seem to grow well initially but never thrive long term and are probably the only fruit that isn’t really satisfactory for container growing. 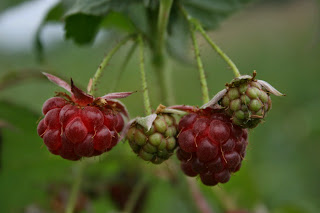