It will soon be that time of year again; harvesting your long awaited crop of big, juicy apples. Alas all may nopt be as it seems. Nothing is more disappointing than having a bountiful apple crop spoiled by bitter-pit. It can ruin the entire crop. Actually a disorder rather than a disease, an understanding of the cause makes it easier to cure.
All varieties of apples can get Bitter Pit, and Asian Pears as well, but some varieties are more prone than others. Bramleys and Howgate Wonder, plus Charles Ross and Blenheim Orange are particularly prone.
Bitter Pit presents itself as tiny brown dots on the skin surface. When you cut the apple, inside these patches increase in size and appear as brown stains in the flesh which go right through to the core. Although not rotten, they aren’t good to eat because the taste is usually bitter hence the name. The problem often does not become apparent until the fruits are nearly mature as it starts inside and works it’s way out until the tiny pin prick like brown dots appear on the surface of the skin but by then it is much too late to do anything.
Bitter Pit arises when there is a lack of calcium in the soil. You may perform a soil test and find that there are decent levels of calcium in the soil but the problem is exacerbated when the soil is dry as well. Calcium cannot be taken up and used by the tree without sufficient moisture.
So your first course of action would be to apply calcium but then to make sure that the ground around the trees is not dry during fruit development. Calcium is used particularly by the growing tips of the tree, so pruning excess growth and removing long, thin and non yielding growths also helps because it means the available calcium will be directed to fruit bearing growth.
Calcium can be applied in several ways, the easiest is to use agricultural lime, and there is also a product on the market called Nutra Plus Calcium. This should be applied fortnightly during the growing season. 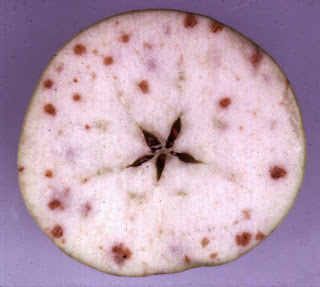