Cox’s Orange Pippin is almost inarguably England’s most popular apple and probably the variety that comes to mind first for budding fruit gardeners. But it can hardly be described as the perfect garden apple. It’s disease resistance is negligible and to get those perfect wonderfully flavoured fruits you need to be vigilant against all the fungal diseases. Cox’s Orange Pippin is certainly not a variety to be grown organically!
Happily, for devotees of this most flavoursome of apples, Cox’s Orange has almost inevitably been used extensively in breeding work since it’s introduction over a hundred years ago and there is a good choice of similar tasting varieties that make much better garden trees. Although perhaps it can be claimed that none of them quite live up to the extraordinarily high flavour standards of their trailblazing parent, they are imbued with enough true Cox’s flavour to pass the palate test with most discerning gardeners. What’s more these are trees that are easier to grow and more reliable cropping.
My first recommendation would be to a direct sport of Cox’s itself – and a sport which showed cleaner, healthier growth in the process but which has fruits nearly identical to Cox. It was named, with a complete lack of inspiration – Self Fertile Cox. A relatively new introduction of not more than 15 years standing, it is, as the name would imply, a valuable addition to the resource of truly self pollinating apple varieties for the one tree garden.
‘Sunset’ is a variety of considerably greater antiquity and was for a time a favoured orchard variety. A direct seedling of Cox, it was raised in 1918. The fruits are relatively small but gaily coloured and the flavour is powerful and rich. Ready for picking from late September, so earlier than it’s parent, but will keep until December.
Kidds Orange Red must be one of the most popular of the Cox type apples but it isn’t an English apple at all, having been raised in 1924 in New Zealand. It is much more highly coloured than a Cox’s and the flavour is similar at first, but develops a softer, more subtle, floral quality later on in storage. It’s various flavour nuances develop better with some warm autumn sun, but most seasons it is a very finely flavoured Apple.
Not all of the Cox type replacements are old varieties. My next choice is a relative newcomer, Red Windsor was introduced scarcely 10 years ago and has rapidly established itself on the commercial stage. It must be the most wonderful tasting apple you can buy in the shops [although still not yet widely available] it combines beauty – it is very heavily flushed in scarlet – with a magnificent tour-de-force flavour that is frankly irresistible and quite unexpected in such a highly coloured apple. Red Windsor is a naturally compact grower, a heavy yielder, and it is self fertile too so can be grown on it’s own and still produce good crops. It is quite early, for use from late September through to November.
Now to beautiful Devon where a local favourite called Woolbrook Russet achieved greater popularity for a time. Another oldie, this time from the early 1900’s, although it has some russet on it’s skin, is not really a true russet. It has some Bramley in it’sparentage, which makes it not only larger, but a little sharper too but no less enjoyable. It will store until the new year.
Fiesta is a more modern variety that goes under another name commercially. You might sometimes see it marketed as ‘Red Pippin’ It’s an ideal garden tree, heavily yielding, precocious, spurs freely, suits all growing applications and is somewhat frost tolerant. It is usually regarded as having a Cox type flavour but it is a bit flatter and sharper than a Cox, but still one of the better flavoured apples you can grow. A definite first choice for home gardeners.
Finally mention must be made of an old heirloom variety called St Cecilia. You will need to go to a specialist variety for this one as it is not widely available, but the fruits ripen much earlier than the traditional Cox season, and the flavour is wonderful! If you want to grow something different then St Cecilia is for you. It’s one of my favourites. 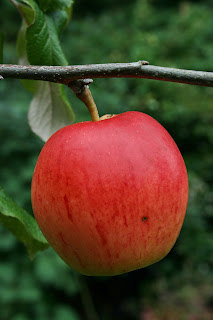