Here’s an ode in celebration of the almost endlessly diverse, complex and fascinating flavours of the Apple tree. Have you ever thought how different an apple can be, not just from one variety to another, but within the same variety depending on it’s stage of ripeness? Even those who have not actually experienced the wonders of a home-picked apple, and have only Supermarket-bought fruits on which to base their experience, can wonder at the marvelous complexity and variety this one fruit can offer. Of course if you grow your own apples, then the variety – and range of flavour characteristics – increases one thousand fold.
Apple flavour types are actually divided into groups based on characteristic and very often within these groups lies a common variety. Even within these groups there is room for endless variety and different nuances and subtleties will become apparent, not only from one season to another depending on growing conditions, but even in different localities and of course as mentioned before, how ripe the fruit is. It certainly isn’t too much of an exaggeration to say that for the connoisseur, sampling a range of apple varieties can be easily as richly rewarding and fascinating as vintage wines!
Here are the flavour groups:
Refreshing/Savoury This section primarily applies to the earlier apples. They may not develop the full bodied nuances and flavours of the later varieties but they have crisp, juicy, sprightly acidity and a brisk fruitiness which is very refreshing. Discovery, Beauty of Bath, Red Millers Seedling, Early Jullyanna, Merton Knave, and James Grieve and are good examples within this group.
Strawberry flavoured Is perhaps the most difficult character to capture and is often only present for a short time. Most apples with this flavour have some Devonshire Quarrenden in their lineage. Worcester Pearmain has this flavour most famously, so too does Katy, Bens Red and Devonshire Quarrenden itself. Some very old French varieties take this character a step further and develop a distinctly raspberry-like taste as they mature fully.
Vinous Is applied most often to the slightly later very red apples such as Red Delicious, Jonathan, Spartan and the many MacIntosh type varieties. This is a slightly ‘winey’ flavour that has said to be akin to a cross between melon and strawberry. The fruits need to be properly ripe to display their full potential, whereupon the flesh will be very tender and white. Many of the varieties in this group do not often mature properly in the English climate and in these cases the flavour can be disappointingly bland. Spartan is a noteable exception.
Dense and fruity A small group of apples with moderately sized golden fruits, descended from Golden Pippin, they have a dense flesh and an intense fruity taste.
Aromatic Is probably the most sought after flavour quality in an apple, certainly in England. No finer example exists than the celebrated Cox’s Orange Pippin. This variety, and Ribston Pippin, have produced a plethora of similarly tasting varieties, among them Alkmene, Sunset, Tydemans Late Orange, Suntan, Fortune and Kidds Orange Red which is slightly milder. Eaten early in the season these varieties can be powerful and very intense, but later on they soften and can become almost floral.
Sweet and scented Few, if any English bred varieties carry this flavour type and they tend to be more prevalent on the continent and in American and even Japan. At their best these apples can be very sweet and have light flowery quality, but they can also be empty and uninteresting. Commercially grown Delicious is just such an example.
Honeyed Can be found in Golden Delicious when well grown and fully ripe. It is also present in Jonagold, Alkmene, Elstar, Limelight and Crispin.
Aniseed This taste is most famously associated with Ellisons Orange and Red Ellison. It is a very interesting flavour variation in apples which can become quite rich and intense. It is present in a small number of other varieties as well.
Russet – Nutty Often described as ‘nutty’ Russet apples have their very own flavour quality. To complicate matters, some russet varieties, such as the new Hereford Russet have an element of russet character combined with the rich aromatic Cox type flavour.
Pineapple A select group of varieties have a very pronounced pineapple like quality to their taste, most notably Pitmaston Pineapple, and also Luscombes Pine, Ananas Reinette and is also sometimes present in Suntan and Alkmene. 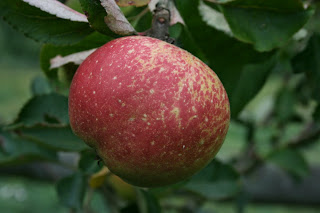