MY 'NEW FRUIT GARDEN CLASSICS'
Raspberry Autumn Treasure
A new variety of Raspberry cane that is simply in a different league to ‘Autumn Bliss’ the old standbye.
Autumn Treasure outperforms on a far heavier yield, much, much larger plum and juicy berries, a longer season and smooth, spine free canes. It could be described as the ‘perfect’ Autumn fruiting raspberries. Some fruits weigh in at twice the weight of an average Autumn Bliss. The flavour is actually better – ripe, rosy and sweet, and the season has been recorded from 24th July until 5th November this year. The fact that the canes are actually completely without spines, makes harvesting this super heavyweight crop even more of a pleasure.
Autumn Treasure has only consistently been available for a couple of years but it will surely be a surprise if it were not to become the most popular Autumn raspberry by far, for it is outstanding.
Plant the canes 18” apart, with 6’ between rows, between October and March. Cut the old canes that have fruited down to the ground in February, leaving the new to fruit later that year. 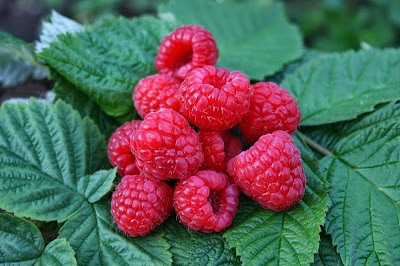