A RASPBERRY BY AN OTHER COLOUR….

A RASPBERRY BY AN OTHER COLOUR….
Well, Raspberries are famous for being red, aren’t they! But there is more to these delectable fruits if you delve a little closer you can discover an array of colours that can considerably broaden your soft fruit growing repertoire and add a bit of excitement and colour to your summer soft fruit bowl and display.
Golden Raspberries
Variably called golden, yellow or even apricot, these super-sweet and delicious Raspberry cultivars were famously but rather briefly commissioned by a certain well known food store for stocking in their stores. But it didn’t last long as the fruit quality of yellow Raspberries do not compare to the best commercially grown red ones. So they are relatively seldom seen in stores and shops.
The fruit may be smaller but it is delectably sweet and mild and also very pretty. There are a few varieties you can try, including summer and autumn fruiting cultivars, and they are all grown in just the same way as red varieties.
Fallgold – an old variety, and Allgold - a no-relation newer one, yield from late August and through September and beyond. They should have the fruited canes cut away in February.
Golden Queen and Golden Everest are summer fruiting. There is also a new summer yellow variety called Valentine which has larger berries and is worth hunting out. These varieties should have the old fruited canes cut away as soon as they have finished.
Yellow/Golden/Apricot raspberries are at their best eaten fresh for dessert and can also be made into pretty apricot coloured jams. Plant 15” apart and 6’ between rows.
Purple Raspberries
An interesting and sought after variation. The fruit colour is a dark and dusky purple. There is only one variety in cultivation, called Glencoe. The berries are small but the colour is dramatic and the flavour is rich and powerful. It can be e enjoyed fresh but is better added to yogurts or jams and preserves. The growth habit with this Raspberry is different, it makes a more bushy wide spreading plant that should’t be pruned as hard as conventional raspberries. It has a smooth shiny purple cane and should be planted 5-6’ apart.
Black Raspberries
A rarity and very difficult to acquire yet Black Raspberries have been grown occasionally in this country for more than 30 years. A very bushy and quite attractive Raspberry with silvery-white bloomed prickly stems, the s mall fruits ripen to almost black. The flavour is divine – aromatic, complex and sweet. Three varieties have been known over the years – Blackie, Starlight and Bristol. Plant 5’ apart. 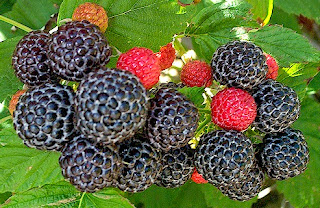