THE 5 BEST RUSSET APPLES
These most distinguished of apple varieties, the small group known as Russets, bring a special extra dimension in flavour and character to our apple growing history. Here’s a celebration with the 5 best varieties for garden culture; I hope the characterful nutty flavours of these treasures will have you inspired to plant a Russet in your garden soon!
1] Herefordshire Russet
This newer variety is my number one because it is so reliable, frost resistant, partly self fertile and has the most divine flavour. It has the basic underlying true Russet character but also a dash of the Cox’s Orange about it – a wonderful combination! The taste is deep and rich and complex…. The fruits are ready for harvest in early October and are suitable for use until Christmas or maybe a little longer. The fruits are half to three quarters russetted over a green gold background and sometimes have a cinnamon red check. This tree will set a worthwhile crop even when planted on it’s own.
2] Egremont Russet
Definitely the most well known and oft-planted variety. It is frost tolerant but very early flowering so I wouldn’t necessarily plant it in a frost pocket. But it is reliable and is a very ‘true’ Russet in flavour and character. The dense creamy flesh has a savoury, nutty slightly dry flavour. The fruits can be enjoyed from early October for 6-8 weeks.
3] Ashmeads Kernel
Not a heavy cropper but large and absolutely divinely flavoured, rich and deep sweet-sharp and slightly pear like. A Gloucestershire raised variety of over 300 years standing, fruits few but large and should be picked in early October. They will then store until well into the new year. Late flowering.
4] Princess
Introduced a little over 15 years ago as a replacement for Egremont Russet with larger, better quality fruits. Egremont Russet has proved a tough act to follow and Princess has never really caught on – but it’s a variety of quality and deserves wider planting.
5] Brownlees Russet
This connoisseurs variety was raised in 1848 in Hertfordshire. It’s not a pretty apple, nor particularly large, but greatly prized for it’s flavour which is intense and powerful, likened to fruit frops, the flesh is juicy and firm, then yielding later on. The blossom is very attractive and markedly deeper in bud than appleblossom usually is. Season October – December. 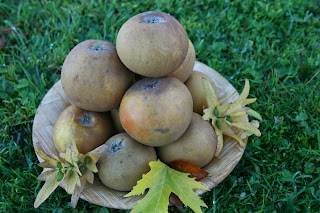