How to grow Autumn fruiting Raspberries

Often considered the most valuable of all Raspberries, Autumn fruiting varieties – sometimes called Primocane varieties – usually start to ripen in August and will then continue indefinitely, well into the Autumn until frost cuts them off. Because the available moisture and rainfall begins to increase again at this time, and with the benefit of hot late summer and autumn sunshine, they are often sweeter and juicier than the maincrop varieties that ripen during the Summer.
Cultivation hints
In basic requirements they are the same as maincrop Raspberry canes; a good well drained fertile soil in full sun is preferred. Raspberries are shallow rooting so it does not have to be a deep soil but it does need to retain some moisture during the hotter summer months, otherwise you will need to irrigate. The canes should be planted 15” apart, with a minimum of 6’ between rows to allow for maintenance and harvest. The canes can be planted at any time during the dormant season [usually October to late March] and you should only ever buy from Nurseries offering Ministry Certified or Virus free stock. Some older varieties may not be oncluded in the Ministry Certification scheme so make sure they are Virus free before buying.
Pruning
The main difference between Primocane [Autumn fruiting] and Floricane [maincrop] varieties is the issue of pruning. The former fruit on new growth whereas the latter fruit on old canes. This affects fundamentally the timing of pruning. Our luscious Autumn cropping Raspberries should have the canes that have fruited cut away in February, right down to the base. This leaves the new growths to come through and fruit later that same Summer and Autumn.
Feeding
A top dressing of Phostrogen applied in February will greatly increase yield. If you feel the canes are lacking in vigour then Nitrogen can be applied but do not over-apply Nitrogen otherwise it will encourage growth at the expense of flowering and fruiting.
Varieties
The range of available varieties in this category is relatively small but some new varieties are coming onto the scene together with some lovely old standbys eans there is a reasonable selection to satisfy most gardeners.
Autumn Bliss
Remains the famous name in Autumn fruiting Raspberries and is still the most popular variety. It is compact and self supporting so does not need posts and wires and is a good choice for windy positions. The flavour is acceptable but has been bettered but it remains a good cropper.
Himbo Top
A new Swiss raised variety with large fruits and spine free canes. Becoming popular and sought after; crop is vastly superior to Autumn Bliss.
Autumn Treasure
My number one choice as it seems to have everything. Ripens from mid August to November; very large plump and well flavoured berries together with spine free canes make picking easy. Highly recommended.
Zeva
An old variety that is self supporting and crops during August and September. Outclassed but fondly remembered.
September
An old variety and one of the best for flavour with plump, circular rosy red fruits late August to early October. Still well worth growing.
Heritage
It’s habit is taller than most Primocane varieties and it also has a very good flavour although the fruit quality can be disappointing. Hardy and easy to grow. 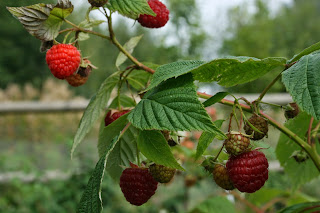