If you want to grow gooseberry bushes then this is a handy appraisal of the methods available. Aside from the traditional gooseberry bush there are also some other ways you may not be familiar with!
The typical gooseberry bush is certainly the most heavily cropping option. You will need to space such bushes 4-5’ apart and they will grow about the same in height. Pruning consists of removing some lower branches so you get a ‘leg’ on which the bush sits. This makes cultivation and harvesting easier. A normal bush will usually be the first choice for most budding Gooseberry growers and this is how they are grown commercially, but the one main drawback is that of mildew which will be harder to control. This is because the growth is more congested and the air circulation poorer. When growing gooseberry bushes make sure you prune for a fairly open framework of branches to prevent it. This is also a good idea for the red fruited varieties which will colour more strongly with the advantage of better sunlight.
Gooseberries for smaller areas
Possibly the most valuable method is that of cordon training your Gooseberries. It is certainly the easiest; a single cordon is just one mains tem with numerous shortened laterals coming off it, which bears the fruits. A double cordon has two main stems in a ‘V’ shape again with short fruit bearing laterals off these two main stems. You can plant cordons just 18” apart. They can be supported with the stems tied to simple bamboo canes or a post and wire system, or you can grow them against a wall. Pruning is just keeping the new growths trimmed back to maintain the basic framework. An ideal method for restricted areas, the height can be maintained at anywhere between 4’ and 6’ to suit you.
A Standard Gooseberry is a specialised growth method that seems to be gaining popularity. Here the gooseberry ‘bush’ has been grafted by the Nurseryman onto a clean straight standard stem of between 3.5’ and 4’ to give the affect rather like that of a standard Gooseberry. The advantage is easier harvesting; no bending to pick your fruits! As air circulation is better because the main growth is higher up, mildew can be lessened. And, although no Gooseberry could really be called attractive, it is certainly a more formal and effective specimen and looks good in a potager or the kitchen garden. You can pant standard gooseberries in the border, or in pots. Make sure the compost has good drainage ‘though. Pruning is exactly the same as that of a normal bush.
When you have chosen which method suit your requirements the best, you can then start selecting varieties. There isn’t any correlation between the two and one choice doesn’t affect the other. All varieties of Gooseberry are equally suited to bush, cordon or standard growing. The only consideration with standard Gooseberries is availability; the choice of variety is usually restricted to just a few as this is quite a time consuming method of cultivation as far as the Nursery is concenred so only a few are usually grown each year. Expect to pay about £25 for a standard; over double that of a bush but reasonable considering the skill and time involved. 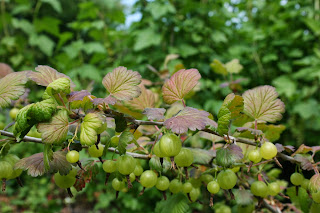