A recommendation for the best of these delectable fruits to grow in your garden.
1] OULLINS GOLDEN GAGE
Selected not only for the perfect juicy sweetness of it’s flavour but also it’s reliability. Ripening in Mid August, the fruits are large and golden yellow, inside and out. A very fine dessert gage with a sweet flavour and plenty of juice. Strong growing and self fertile.
2] DENNISTONS SUPERB
If you are looking for more of a ‘true’ Greengage tree then the olive green circular fruits and fragrant intense aroma of Dennistons Superb is for you. Also sometimes called the Imperial Gage, Dennistons Superb is hardy and suitable for Northern areas, and self fertile too.
3] STELLA’S STAR
A newcomer that is already proving itself as one of the very best. Stellas’ Star is a naturally compact, freely spurring and tremendously precocious Greengage. The branches are simply covered in massed clusters of small pale green fruits which have a lively flavour. Self fertile and commences fruiting at an early age.
4] EARLY TRANSPARENT
Often considered royalty when it comes to Greengages, certainly the flavour is right up there amongst the best. Early Transparent is a circular primrose yellow Gage with small red dots; a beautiful looking fruit. Growth is neat and upright and usually fairly compact and it is self fertile.
5] OLD FASHIONED GREENGAGE
The ‘original’ Greengage with that unmistakeable, traditional powerful and perfumed taste that makes such wonderful jams and pies. A small growing tree, it is not wholly self fertile so provide a pollinating partner such as Victoria or Oullins Golden Gage. 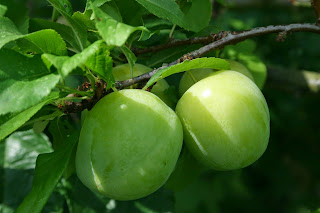