A GUIDE TO GROWING MULBERRIES

A Mulberry Tree must be one of the most special fruit trees you will ever plant. Steeped in such History and tradition, the exciting flavour and mystique ranks Mulberries high on the wish-list of many a gardener.
It is said that the first Mulberry to be planted in Britain was at Syon House in 1548. There is a grand avenue of them planted at Windsor Castle. These are tremendously slow growing trees so suitable for smaller gardens, and very long – 400 years or more.
There are relatively few species and cultivars and these are usually divided into 3 categories.
The Black Mulberry – Morus nigra
Is the the tree most often coveted for it’s fruits. The loganberry-like berries ripen in August and have a sharp, powerful taste that is usually cooked and eaten with sugar, either as a jam, in pies, bottled, or simmered and served with ice cream. A few varieties have been selected, such as ‘Chelsea’ – also known as King James.
The White Mulberry – Morus alba
Used to be used primarily for feeding the larvae of the Silkmoth so was useful in the silk making industry. The fruits are pinkish white and much sweeter, although once considered inferior to the Black, they are actually good dessert fruits and you can eat them straight from the tree, The tree has shinier leaves than the Black Mulberry and is no less ornamental. There are weeping forms [Morus alba pendula] and a new selected fruiting form called White Beauty.
The Red Mulberry – Morus rubra
Is very seldom encountered and comes originally from the Asiatic countries. It’s fruits are a lighter red than the Black Mulberry and the flavour is somewhere between the two. There is a form called ‘issai’ and ‘nan’ as well.
Planting
Trees are usually offered as pot grown so can be planted at any time of the year, but September to April is the best. Be careful not to damage the roots when planting; they have no special soil requirements and can also be planted in grassy areas.
Pruning
Mulberry trees are never pruned except for the removal of dead growths on older specimens.
Harvesting
Wait until the fruits are absolutely fully ripe before attempting to harvest. This may be up to 2 weeks after they begin to colour. The easiest method of gathering the crop is to spread a ground sheet beneath the tree and shake the branches. The fruits will bruise and bleed no matter how carefully you hand-pick them so there is no advantage in this and the fruits will need preparing and using soon after you pick them.
The fruits may not all ripen at once so you will probably need to go over the tree more than once to maximise the yield.
Growing in containers
Mulberries are innately suited to Container growing. Any pot of 20-24” or more is suitable and use a loam based potting compost, feed annually with an Osmocote tablet. Trees grown in containers will start to yield much earlier in life, after just 4 or 5 years. A tree in the ground may take double this period to mature to fruiting age.
Pests and diseases
Mulberries are largely free of trouble. Canker can be an occasional problem. 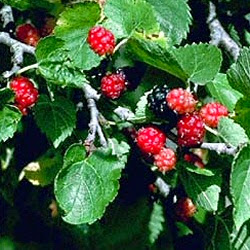