It was until a few years ago, unthinkable that any Pear tree could rival the old standby ‘Conference’ for popularity in the hearts and minds of home gardeners. Yet Concorde has now superseded Conference as a garden Pear and a commercial Pear as well!
Raised from a cross between Conference itself and Doyenne du Comice, this cross has managed to combine the best attributes of both parents. From Conference comes the self fertile flowering, frost hardy reliability and heavy crops; Doyenne du Comice has contributed some of it’s sublime and super-juicy flavour.
Concorde is a naturally compact tree and will probably make the smallest garden tree of all. On a Quince C stock it can be contained with ease to 6-8’ in height. It is ideal for frosty areas and it is self fertile. Ready for harvesting in late September, the elongated pale green slightly russetted fruits can be enjoyed for about a month with storing.
Concorde was raised a little over 20 years ago so can hardly be called ‘new’ yet it is already the most Popular of all pear varieties, and rightly so. It is also a good pollinator for other varieties and suits bush, cordon, fan, espalier and stepover. 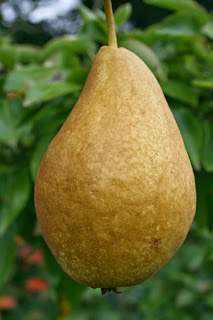