This is a subject I wanted to clarify because it is the one area beginner fruit growers ask about more often than anything else; at first glance it can appear confusing or discouraging even.
Fear not; fruit nurseries and experts have developed classifications and systems that make the subject easier to understand and, in most cases if you ask the question they will help you make the correct choice to ensure your investment fruits well.
A great many cultivars and varieties of fruit that have been raised will not crop on their own, or, if they do crop, the yields may be poor or of poor quality unless they are partnered with a suitable variety. This mostly applies to fruit trees but a few soft fruits need pollinating partners too. In all cases this should be a different variety and it needs to be in the correct ‘group’ – this is usually regarded as the correct season for, even though it might appear to you that apple trees, for example, all flower at the same time, they do not. There is a period of approximately 2 weeks or more and not all varieties will be producing viable pollen at the same time. So, for convenience sake varieties are given groups which refers to the season of blossom. This can be in the form of a number – 1,2,3 or 4 – or a letter – A,B,C,D according to which the Nursery prefers to use. In both examples, number 1 is the earliest and 4 the latest, as is A the earliest and D the latest. To enable varieties to pollinate you must choose varieties with the same group for preference, but you can also choose adjacent groups as there is some overlap. You could therefore, with an apple tree choose a Beauty of Bath, which is an ‘A’ pollination group, and a James Grieve, which is a ‘B’ group and these would work well.
Incompatibilities
Although in most cases it is simply a matter of making sure that varietal choices have overlapping flowering periods, a few varieties are incompatible with each other. This is particularly so with Cherries; and you must not rely on sports of the same variety as the pollen will be identical. You may, for example have a liking for Cox’s Orange Pippin apples and decide to plant a Cox’s Orange Pippin and a Queen Cox’s together but it would not work because they have identical pollen. There are incompatibilities with many Cherries as well.
Triploid varieties
A few varieties will be described as Tetraploid; mostly with apples and pears. These require 2 different varieties to yield to their greatest extent. With these the choice of season is wider and they usually accept pollen from most mid season flowering varieties. Sometimes gardeners are put off from planting Tetraploid varieties but they are worth persevering with because there are several top quality varieties that happen to be Tetraploid. A Tetraploid will not pollinate another Tetraploid as they have no viable pollen.
Here are notes fruit by fruit and the pollination requirements concerned.
Apples
As discussed above, are divided into flowering groups. Choose the same or adjacent varieties to match. A few self fertile varieties are available that can be planted on their own and will be described accordingly in the catalogues. But wherever possible, a pair of appropriately matched different varieties will always yield better.
Pears
Exactly as above with Apples.
Plums
Have groups too but many varieties are self pollinating or partly self fertile.
Gages and Damsons
As described for Plums.
Cherries
The most difficult fruit trees to classify. Make sure you choose from nursery catalogues, printed or online, that adequately describe suitable pollinators for each variety. Most of the best modern garden varieties tend to be self fertile but most of the older varieties are not.
Peaches and Nectarines
Are virtually all self fertile and do not need a pollinator.
Apricots
Are virtually all self fertile as well.
Figs
Do not need a pollinator.
Rhubarb
Of course does not need pollinating.
Strawberries
To all intents and purposes strawberries do not need pollinators. There is a very small number of varieties that have been found to be self sterile but none of these are popular garden varieties; ‘Pandora’ is one such variety that is often planted with ‘Pegasus’ to encourage yield.
Raspberries
No known raspberries need pollinaors.
Gooseberries
No Gooseberries have pollinating issues.
Blueberries
All Blueberry varieties may produce a crop on their own but in all cases it is increased in yield and quality by planting with another different variety. Virtually any pairing will produce good results so my advice would be to always plant a pair of different varieties.
Kiwi Fruit – Chinese Gooseberry
These delectable exotic fruits grow well in warmer aspects and there are distinct male and female varieties. Plant one male variety for up to seven females and you will get good crops. There are one or two self pollinating newer varieties if you can only plant one vine.
Grapes
Do not normally require a pollinator.
Blackberries and Hybrid Berries
No pollinators required.
Cranberries
Are not classified but yield better when planted in groups of 2 or more. 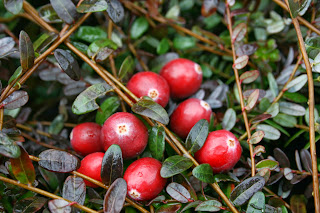