THE TOP 5 AUTUMN FRUITING RASPBERRIES
The range of available varieties in the Autumn fruiting category is relatively small but some new varieties are coming onto the scene together with some lovely old standbys means there is a reasonable selection to satisfy most gardeners. Here’s my recommendations, a good mix of the old and new, both of which have desirable attributes!
Autumn Bliss
Remains the famous name in Autumn fruiting Raspberries and is still the most popular variety. It is compact and self supporting so does not need posts and wires and is a good choice for windy positions. The flavour is acceptable but has been bettered but it remains a good cropper.
Himbo Top
A new Swiss raised variety with large fruits and spine free canes. Becoming popular and sought after; crop is vastly superior to Autumn Bliss.
Autumn Treasure
My number one choice as it seems to have everything. Ripens from mid August to November; very large plump and well flavoured berries together with spine free canes make picking easy. Highly recommended.
Zeva
An old variety that is self supporting and crops during August and September. Outclassed but fondly remembered.
September
An old variety and one of the best for flavour with plump, circular rosy red fruits late August to early October. Still well worth growing.
Heritage
It’s habit is taller than most Primocane varieties and it also has a very good flavour although the fruit quality can be disappointing. Hardy and easy to grow.
Autumn fruiting Raspberries enjoy the same planting distance as summer fruiting - 15" between canes and allowing 6' between rows. Many say the fruits of these Auutmn varieties of Raspberry are larger and juicier even than the saummer ones as they often benefit from more rain as well as the warm autumn sunshine. 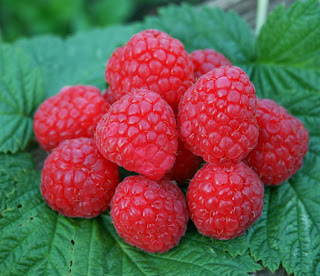