The best cooking apple tree for the garden?

APPLE ‘BOUNTIFUL’
I didn’t want to commit in saying whether this is a cooking or a dessert apple for it’s value lies in versatility – it is ideal for both.
Bountiful is a variety for mid season harvesting that will then keep with ease in store until the Spring. A regularly shaped, fine shiny mid green apple, some specimens will develop a slight bronzy orange flush on the sunny cheek. As a garden tree, it is idea being free to spur, precocious, fruiting at an early age and easily pollinated. It is also a great pollinator for other varieties itself.
As a cooker it seldom needs sugar to sweeten it. It has a good flavour and keeps some texture when cooked. Great for baking, pies and stewing or freezing.
But it’s also perfect for dessert use later on, and comes in for use when most other varieties have gone off in store. Sampled from late January to March it has softened enough to eat fresh and has a crisp, clean, refreshing and juicy texture and flavour which would definitely suit those Granny Smith lovers.
So, Bountiful – something for everyone.
Share your thoughts and recommendations for the best cooking apple tree for garden growing. 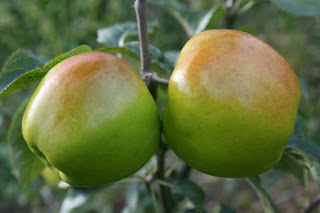