How to force Rhubarb for early pulling

Now is the ideal time to consider forcing some rhubarb crowns for extra early, juicy crops. What could be nicer than the first tender, sweet and flavoursome sticks, harvested in February when so little fresh fruit is available?
There are two options for forcing rhubarb; it can be done outside, in situ, or clumps can be brought indoors. The latter provides even earlier results but is a little more arduous.
For forcing in the garden, select a robust clump and provide cover with an upturned dustbin, weighted down with clods or a rock so that it isn’t blown over during periods of high winds. The bin should be removed 3-4 weeks later by which time the basal buds should have been encouraged to make sufficient growth for harvest.
Alternatively carefully dig up an established clump and bring it into a cellar, or garage or shed, and place the roots in a large polythene bag or sheet. Cover and await results in often just 2 weeks time. Water as required and then re-plant in the garden straight after harvesting has completed.
Forced rhubarb can be harvested the first season but should then be left to regain it’s strength the next. Feed well after harvest.
Not all rhubarb varieties are suitable for forcing; Timperley Early is particularly good for forcing, so too is Stockbridge Arrow. 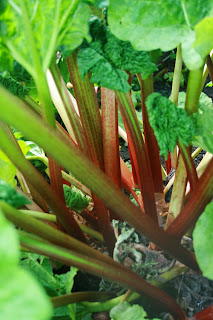