Your guide to unusual and seldom seen fruit varieties
APPLE BROWNLEES RUSSET
This connoisseurs variety was raised in 1848 in Hertfordshire. It’s not a pretty apple, nor particularly large, but greatly prized for it’s flavour which is intense and powerful, likened to fruit drops, the flesh is juicy and firm, then yielding later on. An added feature is the blossom which is notably attractive and markedly deeper in bud than appleblossom usually is. Season for picking October – December. A small heavily russetted golden brown apple, flesh greenish cream, firm but yielding.
Pollinate with other apples in the ‘B’ or ‘C’ groups. Suits cordon, bush, half standard, column, fan and espalier growing methods. 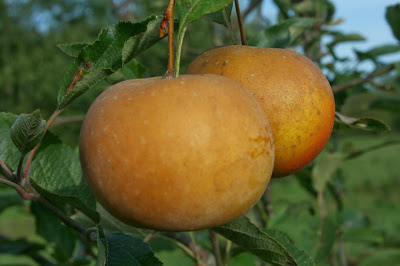