Second only in popularity to Strawberries, and often rightfully called the ‘Queen of soft fruits’, when it comes to planting Raspberries you want to gain the longest picking period possible so that you can enjoy those luscious, succulent fruits just that bit longer.
With major breeding stations around the world concentrating on improving and extending the boundaries of this commercially important crop, it’s no surprise then that the season can be a very long one. There is no reason why the home gardener cannot harness those qualities in the garden or allotment.
Raspberries fall into two distinct categories and 4 main season variations.
Maincrop vs Primocane
Maincrop Raspberries are often called Summer raspberries; they have one main pick season which can start in early July and runs into August. The maincrop raspberries are further divided into the seasons early, mid and late. The earlies of course are the ones starting in early July and the lates commence Mid July and fruit into August. Late season should not be confused with…
Autumn fruiting or Primocane varieties
Which do not really start until the last of the maincrops have finished, usually the second half of August. They then continue to crop well into Autumn, often not stopping until the first frosts take hold.
The main cultural differences between the two groups is that of pruning and it’s vitally important that the gardener understands the fundamental differences, otherwise you may get no fruit at all!
Regular Maincrop varieties fruit on old canes formed the previous year. That is why cut these old canes out completely at the end of the season and train in the new canes that have emreged from the base that year and which will form next years crop.
Autumn fruiting canes fruit on new wood. If you were to prune in the same way as the maincrops you would get nothing at all! Wait until February and then prune out the old canes leaving the new.
Feeding and other cultural preferences are of course identical. For feeding I always recommend a high potash feed spread around the canes in February.
Maincrop varieties by Season…..
Early Varieties
GLEN MOY Is the predominant early and the most popular garden and commercial variety. It’s stems are thornfree making it easy to harvest and manage and the fruits are of good quality.
MALLING PROMISE Is often known as the first Raspberry of Summer and has a better flavour than Glen Moy but the yield is less, the canes are spiny and the fruit smaller.
MALLING JUNO Is a new variety, not yet readily available but has been mooted as a possible succcessor of Glen Moy with some very fine attributes – one to watch out for.
GLEN CLOVA
Straddles the early-mid divide and is agreat seccessive variety with ample vigour and good flavoured large berries. In it’s own right it has a very long picking season and deserves to be incoirporated into every planting programme.
Mid Season Varieties
GLEN AMPLE Is second-early to Mid season and currently the most popular variety of all. It’s fruits are huge and the canes spine free, the flavour is good and sweet. Having outcropped all varieties in trials it’s easy to see the attraction, but it does need good soil to grow well and will not tolerate heavy or waterlogged soils or rainy locales.
MALLING JEWEL Is completely the other end of the scale; an old, old variety with small rosy fruits and whilst it is not shy the yield does not approach the above variety but it is hardy and easy to grow on most soils. The canes are self supporting so ideal for windy conditions. Flavourise it is hard to beat.
GLEN PROSEN
A good mid season mainstay with smooth canes and good quality fruits. Yields well.
Late Season
OCTAVIA My pick as the best late Summer season variety. Ample rounded rose red fruits with plenty of balanced sweetness and true raspberry flavour. The fruits are large and can be borne almost from top to bottom, making for a weighty crop and easily harvested. Gets my vote for flavour, yield, and season which handily covers August.
GLEN MAGNA
Darker in colour than the above, and more spiny but has a very good flavour and regularly shaped long berries which make an attractive display on and off the cane. Vigorous and productive.,
TULAMEEN
The most popular commercial late and well flavoured but the fruits can ripen rather dark in colour which makes them less attractive.
LEO
An oldie that continues to be asked for. Rounded pale vermillion orange berries, flavour full-on and tangy. Suits all purposes and still does well. Easy to grow.
Autumn fruiting
AUTUMN BLISS
The mainstay of the group. Compact, self supporting, yields from August to the frosts. Flavour unremarkable but acceptable and the fruit suits all purposes.
AUTUMN TREASURE
A newcomer which has raised the bar in terms of fruit size – which is very large – yield, and the fact that it is one of the first thornfree varieties in it’s class. Ought to supercede Autumn Bliss sooner rather than later.
SEPTEMBER
A nice oldie [I always like to recommend at least one!] and the nicest flavour of all. The name says it all when it comes to season. Compact and wind resistant and less pernickety than some of the newcomers.
POLKA
This recent introduction has been courted as a good variety for less ideal situations and colder areas. It comes from Poland, has plenty of flavour and an extended pick season. It’s well worth trying.

By selecting a range of varieties covering all the above segregated seasons, you can pick your own raspberries basically for 14 weeks. And you can extend the season deeper into the Autumn too if you have the luxury of a small polythene tunnel – try a few Autumn fruiters in there, on a good season you may still be harvesting at Christmas! And at the beginning of the season you can force Malling Promise for extra early fruits which would begin ripening in the first half of June in a Polytunnel,
PLANTING DISTANCES
Plant all Raspberries 12-15” apart. Rows need to be 72” apart minimum as they will spread rather and you need to allow room to pick and maintain your bed.
MALLING JEWEL 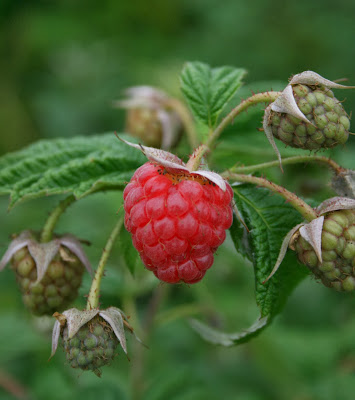 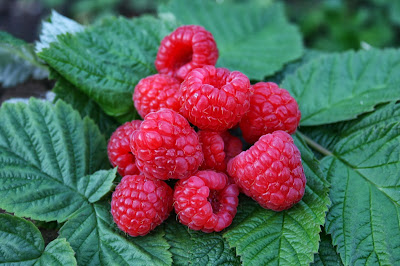