FEATURED VARIETY
CULINARY APPLE ‘NORFOLK BEEFING’
Norfolk 'Biffin' as it is known, was popular amongst Norwich bakers and was frequently dispatched to London fruitiers as a great delicacy. It was first mentioned in 1698 and it’s origins are believed to lie in a large Norwich estate. The large handsome fruits are dark green heavily flushed with dark mahogany red and may be used from early October. In store they last and last, by March becoming sweet enough for dessert use. Cooked, they are superb for all purposes and seldom need sugar. Stewed, they keep their shape, and is considered THE apple for slow baking as they seldom burst in the oven, developing a rich and unmistakable flavour. They have been used in the production of apple crisps - and also for cider making. The Trees are fairly vigorous and eager to please with very heavy crops. Some thinning is necessary in years of over exuberance to prevent bi-ennial cropping and a better fruit size. Good pollinators include Sandringham, Red Ellison, Spartan, Herefordshire Redstreak, Charles Ross, James Grieve and Pixie. The flowers are large and attractive.
There are other regional Beefing varieties with similar characteristics. 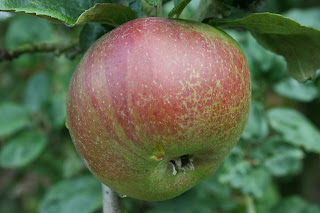