There can be few finer pleasures than the first rosy apples, picked and eaten straight from the tree during summers finest days. For many of us there will have been no fresh English apples for months, as the last of the stored fruits will have been used up in the Spring and resorting to characterless supermarket apples in order to get your apple-a-day can be a dispiriting experience! Maybe that’s why the first bite of the new season English crop seems imbued with such vivid and enjoyable flavour. So here’s my homage to the forerunners of the new apple season, those varieties that ripen from July.
1] REDSLEEVES Maybe I’m biased because this is a variety that we introduced ourselves. Yet, even after 30 years, it’s garden value hasn’t dimmed and it remains a top seller. Redsleeves ripens from early August and is one of the few ‘earlies’ that will actually keep for a few weeks in store. It’s fruits are regular in size and shape, a beautiful even rosy red colour with a crisp creamy green flesh. Sweet and juicy, the tree is naturally compact self fertile and scan resistant. Ideal for organic growing & the one-tree garden – Redsleeves has it all.
2] DISCOVERY One of the ‘famous names’ in English apple growing history that should never be taken for granted, sampling the first Discovery apples of the season is one of the fruit-growing calendar joys. Full of juice and sprightly character, the fruits are usually three quarters flushed a joyous red. It’s a heavy cropper that ripens from Mid August and can be enjoyed just into September. Hardy and durable.
3] MARGARET Named for it’s habit of ripening fully for St Margarets day, which is the 22nd of July making it probably the earliest apple of all. Also known as Red Joaneting, it’s a refreshing slightly sharp apple that is very enjoyable. My pick of the connoisseurs or heirloom varieties.
4] WHITE JOANETING Some say a sport of the above, this makes a change because it’s super-early but not red! A pale light green flattened-circular apple with a very juicy and refreshing flavour, a really lovely variation.
5] IRISH PEACH Harvest from the end of July, this jolly highly coloured apple has a tender cream flesh, some say the finest flavour of all the early apples. Peach like? You decide. An early flowering variety so make sure it has suitable pollinators.
6] BEAUTY OF BATH Too often drops before it’s mature and has a relatively short season when it can be enjoyed at it’s best. But Beauty of Bath is such an attractive apple and when it IS on song it is pure-joy to eat. Capable of heavy crops.
Please share your views on the best early dessert apples in your opinion! 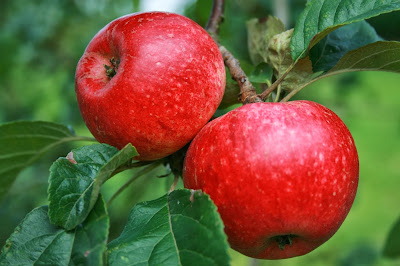