The 5 best Plums for Garden growing

MY TOP 5…. PLUMS
Personal preference, a range of desirable characteristics, reputation and analysis based on performance and personal experience result in this carefully considered 5-best picks for delicious Plums for your garden.
1] JUBILEE Seemingly as if by stealth, this has become our top selling Plum tree. I never thought Victoria would be usurped in the hearts and minds of gardeners in my lifetime – but the enviable performance characteristics of Jubilee have triumphed. For a start it’s hardy – VERY hardy and likely to triumph in colder Northern areas, or frosty Springs. It hails from Sweden you see so anything the English spring can throw at it is shrugged off dismissively! The fruit grade is much better than Victoria and the yield can be simply phenomenal. Self fertile.The fruit is large, a uniform violet-purple, oval and with a succulent yellow flesh. Dessert, but suits cooking too. Flavour is excellent. As good as Victoria? Maybe not quite as good being brutally honest, but it comes close.
2] MARJORIES SEEDLING Often under-rated and a personal fave, this variety gives you really good quality large, fulsome deep dusky purple plums right into October. Deep golden-green flesh, flavour more than acceptable enough for dessert but cooks very well too. Self-fertile, hardy, productive and a really good staple variety. Does well on all applications!
3] VICTORIA It had to be placed despite it’s faults. Too often over crops one year with nothing the next and can be prone to disease. But despite all that, it’s self fertile, yields can be highly impressive and it remains the most ambrosially flavoured plum, and a standard-bearer against which all others are judged. Mid-late August to September season. 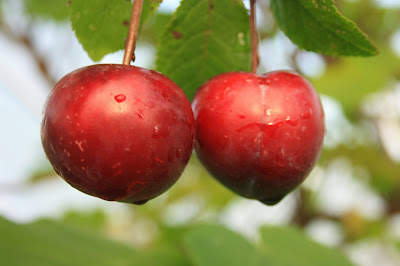 4] BLAISDON RED An interesting newcomer [to our lists anyway] that is sufficiently different to warrant mention. A circular ruby red Plum with a distinctly red-stained flesh. When cooked it turns a quite wondrous shade of ruby red – brilliant for pies and jams and freezes well too. Also suits dessert when fully ripe. Hardy and productive; partly self fertile. Well worth trying! [Pictured above] 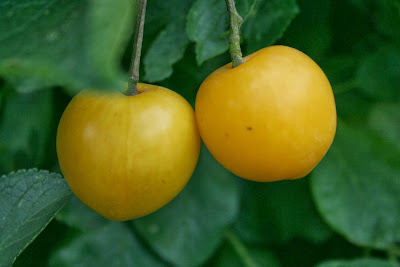 5] COES GOLDEN DROP The most gorgeously flavoured small yellow rounded Plum which is as sweet as nectar and often develops a characteristic apricot-flavour when fully ripe, especially during warmer summers. It really needs a warm wall to give of it’s best although it can be grown free standing. I have also seen it trained against a wall in a cold conservatory and the results were pretty special. Another option would be to grow it in a pot in the cool greenhouse; or you could tuck it into a warm corner as a column-tree that needs very little space. So worth cossetting….[Pictured above]
Just missed the cut but ask me tomorrow and they might be placed….. Czar, Herman, Excalibur, Kirkes Blue, Mallard.