Recommended fruit for a North wall

FRUIT FOR A NORTH WALL
For many the ‘ptoblem’ area of the garden, that cold, unpromosing and almost perpetually in the shade wall may perhaps suppoert a dispirited climbing rose or a virginia creeper…. Yet there is a servicible choice of delicious climging plants that will actually thrive there turning this unwanted area into a productive and beautiful one.
ACID CHERRIES The old Classic cooking cherry ‘Morello’ is the first choice that comes to mind. It just loves a cool wall such as North or East facing and it is self fertile so there are no pollination problems. As a fan trained tree it will require an area not less than 6 x 6’ and if necessary you can also grow it as a column tree which needs even less – 2’ in width and 6’ in height! The latter is easier to prune but a fan trained tree is an elegant sight indeed when mature. Cooking cherries are very useful as they are seldom if ever available to buy in the shops. You can juice them, add them to plain yogurts, make jam, simmer and dribble over vanilla ice cream … or you can freeze or bottle them.
ACID CHERRY ‘NABELLA’ You will have to go to a specialist fruit nursery to find this one as it’s not generally available, but this newer cooking cherry is said to be more productive with better quality fruits so is well worth seeking out.
THORNFREE BLACKBERRIES
Don’t mind a bit of shade at all. Choose a thornless variety especially if it’s an area that is walked passed regularly or if you have an aversion to thorns! My recommendation would be for newer varieties such as ‘Helen’ – which is early, ‘Chester’ – a great late cropping variety or ‘Obsidian’ Mid season. These varieties will need 6-8’ in width but are quite accomodating and can be trained any which way you like. If you want a thornless Blackberry beneath a window then choose Loch Ness which is shorter and can even be grown as self supporting if need be. The mainstay varieties will need wires on which to be tied.
ORNAMENTAL BRAMBLE OREGON THORNLESS
Is a lovely cut-leafed variety with rounded clusters of glossy circular black sweet berries. But it’s main attraction lies in the parsley-leafed foliage which is quite pretty – as good as an ornamental climber – and also turns orange in the Auutmn. This variety is more than able to cope with life on a North wall.
JAPANESE WINEBERRY
Now for something really different. A RELATIVE OF THE Blackberry, this Rubus is decidedly different and rather attractive. The main stems are covered in fine red orange bristles and the deeply veined like green leaves are good to look at too. This would definitely double as an ormamental too but the vermillion orange berries are delicious and said to attain their peak of hedonism when lightly sprinkled with red wine and served as a dessert!
COOKING APPLES Are hardier in general then their dessert counterparts and I could easily recommend 3 varieties that would yield well against a North wall – as cordon, espalier or fan trained. A cordon is much lessdemanding of space – just 2’ width or so and you could if necessary plant a row of these. Fans and espaliers are more difficult to train [instructions are available here] but look most attractive. Varieties such as Arthur Turner, Bountiful, Bramleys or Newton Wonder will all do well. Remember that these aren’t self fertile varieties so if you do not have other apple trees nearby plant a pair to cross pollinate.
I hope this gives you some inspiration to turn that dreaded area into a productive and useful space you never dreamed possible!
Pictured is a handsome truss of 'Bountiful' cooking apples. 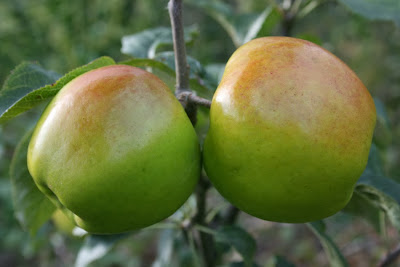