How to grow mildew free gooseberries

The bain of Gooseberry growers, the dreaded powdery or American mildew will spoil crops and foliage, bad attacks covering fruit and foliage. It can be quite debilitating yet a few simple tips can help reduce or banish this fungicidal gardening maniac completely.
If one understands the principals behind it’s preferences then it makes it easier to employ good husbandry that will discourage it. Mildew likes damp – and poor air circulation. If you live in a climate with higher rainfall and cooler summers it is more likely to be a problem than in warmer, drier ones. It is often less prevalent in gardens that are coastal because of the constant breeze and better air circulation.
Firstly, there are some modern varieties that are largely mildew free and it’s a good idea to grow only those. Yet even these can under severe strain, succumb plus there are a great many lovely older varieties that you would miss out on growing because they aren't mildew resistant. Your variety options are severely reduced. Plus you probably already have established bushes of older varieties that get this disease; it makes sense to improve things rather than starting again with new varieties.
Modern varieties with mildew natural resistance include Invicta, Greenfinch, Jubilee, Rokula and Martlet. The first three are green, the last two red fruited.
Some classic delicious older varieties I continue to cultivate regardless of their susceptibility to mildew are Golden Drop, Howards Lancer, May Duke, Green Gem, London, Langleys Gage, Hedgehog [pictured]and Leveller.
Good Husbandry
To improve air circulation through your gooseberry bushes try to prune with an open, less congested end result in mind. Thin out overcrowded branches. Cordons planted near to walls it should be remembered, are more likely to get mildew because of the closer atmosphere. If you are planting new cordons of the older varieties then plant them in the open, with a post/wire or bamboo can support, rather than against a fence or wall.
When you need to irrigate, do so at the roots, avoid wetting the foliage, especially when it is cooler.
Fungicides are available if you don’t mind using chemicals, for the best coverage prevention is far better than cure and you need to start early in the season, as soon as the first leaves are beginning to open and thereafter as per the manufacturers instructions. I haven’t found an organic spray yet that actually works. 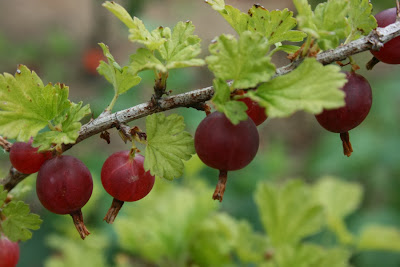