HISTORY OF THE COX'S ORANGE PIPPIN

APPLE - COX’S ORANGE PIPPIN
It might at first seem strange to you that we feature such a familiar and much loved English apple. But read on, you might discover something new…..
Cox’s Orange Pippin was raised way back in 1825 by a Richard Cox. Mr Cox was a retired brewer [lucky man] and he lived in Slough, Berkshire. He raised it from a pip of the even older variety ‘Ribston Pippin’. Queen Victoria was one of the first to become acquainted with this historically famous apple; it was first exhibited by her Head Gardener in 1856.
Looking back it’s maybe a little fortuitous that this variety has acquired such a lasting love affair with the people of this country – and indeed the world, since it is cultivated in many other European countries, as well as New Zealand. It is very much a one-trick apple – and that is it’s flavour. But what a flavour sensation it still is. Rich, complex and decidedly more-ish, this taste sensation has largely been lost to modern cultivation techniques. The apples are harvested far too early and allowed to develop in storage, but without the benefit of sunshine during those crucial last few weeks, the fruits never develop the rounded nuances that is a part of their character. Shop-bought Cox’s remain the tastiest of the supermarket apples but to sample the REAL THING you need to grow your own. Alas this isn’t an easy task for Cox’s Orange is quite incapable of combating disease on it’s own and needs diligent 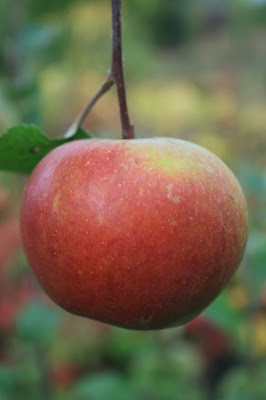 spraying. It is entirely unsuitable for Organic growing.
Did you know that there are infact ‘lots’ of Cox’s Orange Pippins? Apart from selections such as Queen Cox, Crimson Cox, Cox Flanders, Cherry Cox and King Cox, there are various numbered clones which are grown for the commercial trade and what you buy from the shops can be any number of these. It is also inevitible that the variety has been heavily used in breeding. One of it’s most famous progeny is Jonagold, a cross between Cox and Golden Delicious. The most recent release has been ‘Cobra’ – a Cox x Brameys Seedling apple.
So next time you reach for this esteemed Apple in the supermarket you can recall some of the long and fascinating history and origins of this all conquering Queen of Apples……