Aphids
The most common problem associated with apple trees.There are actually several different species of aphid that will attack apple trees. The most important is the Rosy Apple Aphid, Rosy Leaf curling aphid and the woolly aphid. The former causes the leaves to become sticky and distorted and this can attract a sooty black mold. The rosy leaf curling aphid also causes the new leaves to become tinted with red as well as being distorted. The woolly aphid is easily identified because of the prominent woolly covering of the insects which congregate in groups.
Most aphids can be controlled by a good systemic insecticide or the use of soapy water. They can also be rubbed off by hand. Woolly aphids seem impervious to most insecticides; the best course of action is the brush them off with a soft haired brush.
Mussel Scale
Not a common problem; these sap feeding insects of about 3mm long congeraget in groups and form a ‘crust’ over the bark. A winter wash is the best course of action.
Codling Moth
This very small moth lays it’s eggs around the setting blossom in late spring, resultant larvae burrow into the developing fruits. The carepillars leave the fruits in mid august to pupate. Damage presents itself as a small burrowed hole in the fruit; inside the fruits may be discoloured with the frass of the caterpillar. Control is efective by the use of an insecticide applied at fortnightly intervals around blossom time until about mid June.
Apple Sawfly
Similar to the above but the larvae will graze on the surface of the fruit before entering leaving a distinctive spiral-like scar on the fruits. Fruit often falls from the tree earlier than it should. Spray as described above, making sure developing fruits are well coated in insecticide.
Canker
A common disease, especially in wetter areas. Bark becomes sunken and flaky, eventually girdling the branch where dieback then occurs. The disease spreads through wounds and pruning cuts.
Avoid pruning where possible; remove affected branches completely and seal the cut with arbrex. Where the disease enters the main trunk then the only option is to remove the tree. Bordeaux mixture applied three times is sometimes offered as a cure for canker. You can also re plant with more resistant varieties such as Grenadier, Laxtons Superb, Fortune and Saturn.
Mildew
A silvery powder like coating affects the new growths. Most often affects trees which have been too dry, or fed with nitrogen-rich fertilizers. Spray with a good broad spectrum fungicide, from late April and throughout the growing season. Good general husbandry and mulching of the trees will help natural resistance.
Scab
Brown and blackiosh scab like markingsa on the fruit are apple scab. Fruits may also become mis-shapen and cracked. Olive brown patches also develop on the leaves which may fall off mid season.
Rake up abd burn fallen leaves from infected trees. The disease may be controlled by systemic fungicides but it may not be possible to eradicate completely if the disease has taken hold.
Brown Rot
Spores enter young fruits through damage. The immature fruits turn borwn and white mold patches develop. Remove and destroy infected fruit. Difficult to control by chemical means.
Bitter Pit
Presents itself as brown pepper like discolouration inside the fruit. This is a physiological disorder caused sometimes by a lack of calcium in the soil, and made worse by erratic water supply. Apply hydrated calcium nitrate @ 10% dilution in water, starting mid June and continuing at 3 weekly intervals until the Autumn.
Tomorrow I will post an illustrated 'rogues gallery' for ease of identifiaction. 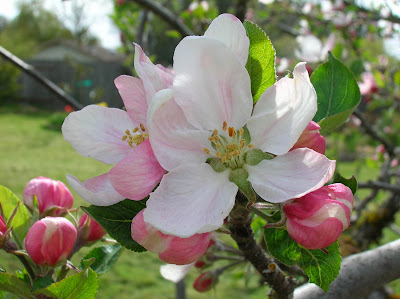