We all grow fruit for the flavour, right? It’s nearly always incomparable to shop-bought samples and growing our own enables us to grow non-commercial and more flavourful varieties in a greater variety than can be purchased at a supermarket. So it goes without saying that fruit harvested from your own garden is going to be a superior experience to your taste buds.
But, every now and then, throughout fruit growing history, a variety comes along that’s just a bit special. Imbued with extra depth or sweetness of flavour, or maybe a unique character or nuance, this piece is a homage to those trailblazers that deserve special recognition and the best place in any collection.
The Medana Tayberry
This cross of a Loganberry was instantly recognised as something special. Not only does it yield much more heavily, the taste is a huge leap forward. Sweeter, deeper and more aromatic than a Loganberry, it’s just sensational eaten straight from the plant. The fruits are long, logan-shaped and a deep claret colour. Wonderful eaten fresh but also makes superlative jams and pies and is great for freezing. If you haven’t grown the Tayberry before, you simply must find out what you have been missing.
The original Tayberry has spines; a new thornless mutation arose which is supposed to be identical to the original in all respects except the absence of spines. However some reports have been received that the flavour simply isn’t as intense.
Apple Pitmaston Pineapple
An Apple that tastes of Pineapple? Surely not – but yes, it does. This variety of considerable antiquity [raised in Herefordshire in 1785] is not a particularly large or showy apple. Yet to sample the fruits just once is to ensure it is never forgotten. The exciting powerful taste has variously been described as containing notes of honey, musk, spice, tropical fruits and pineapple. The tree is upright and a heavy cropper, if somewhat prone to biennial bearing. They can be enjoyed from early October through to December.
This variety requires a warm Autumn to develop it’s flavour nuances completely but is never less than entrancing.
Gooseberry Black Velvet
Actually a hybrid rather than a true Gooseberry but the small dark black-red berries have a wonderful sweet, thin skinned eating experience. You can just pluck them straight from the bush and eat them, but they also suit culinary purposes. It is true to say that this rarity has no equivalent comparison and is very much sought after. It is also vigorous, heavily yielding and largely mildew free.
Strawberry Norfolk Nectar
A new strawberry in the old fashioned style. Has consistently pleased those who claim that the modern strawberry has lost its flavour. This is largely due to the strong influence of the esteemed olf Royal Sovereign which it shares it’s parentage with. No deliberate cross has dared involve Royal Sovereign for many years, because it is such a rotten disease prone grower. But the other side of the family tree has the influence of more modern varieties and this has tempered that Achilles heel to produce a good, clean healthy grower with absolutely bags of divine, rounded true summery strawberry taste. Norfolk Nectar is a summer bearer but will ripen for between 4 and 6 weeks.
Pear Doyenne du Comice
No other Pear has ever approached this, the ‘Queen of Pears’. At it’s best the huge, fleshy fruits simply drip with juice, and are so tenderly imbued with a sublime, sweet as honey taste that words almost fail to do such an eating experience justice.
Doyenne du Comice is definitely a Pear for warmer climes and UK raisd examples can be small, mishshapen or disappointing. Yet with pampering, a warm wall or protected environment, or during unforgettable warm summers and autumns such as 2013, it can on occasion show why it’s reputation is so revered.
The Dewberry
A strange inclusion? It’s certainly quite obscure but the more I taste this delectable little fruit, the more won over I become. This Blackberry relative is a more demure grower with thin, trailing stems, but no less tough and easy to grow. The fruits are like a small blackberry but covered usually in a silvery blue bloom. The flavour is delicate and haunting – almost the very embodiment of fruits-of-the-forest. Wonderful eaten for dessert but also added to pies, preserves and yogurts. Definitely one to try. 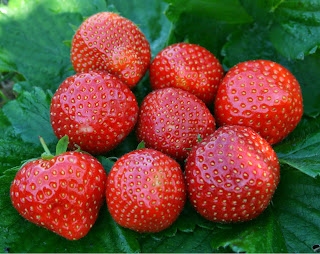