A guide to growing Apricot trees

It is certainly possible to grow your own apricots in the UK & the flavour of your first hand picked English apricot makes any effort involved so worthwhile.
Apricot trees demand the most favourable aspect you can give them and the warmer/sunnier it is then the more likely you will be to be rewarded with regular crops. The trees are themselves frost hardy but die-back may be experienced in very cold winters if the site is too exposed. The main problem to be avoided is that the flowers open very early [often in March] and may need frost protection at this time if the fruit is to set. Have some fleece handy to throw over the tree during frosty nights, when it is in flower.
Apricots are traditionally grafted on to St Julien stock. Dwarfing Plum rootstocks are not compatible and Apricots do not favour hard pruning so it is best to employ tradiitonal restrictive growth methods to contain the tree, unless you have the space to allow it to grow freely – say 10’ in height an width. Otherwise try fan training against a sunny wall, or you can ‘festoon’ the tree – a technique which involves tieing down the main branches and leader and fastening them to a peg in the ground. This creates a most attractive weeping tree which has much reduced vigour. In later years when the training is complete, the wires can be removed completely.
VARIETIES
MOORPARK is the oldest and still one of the most reliable varieties which is always recommended. TROS ORANGE is remarkable for it’s beautiful, highly coloured fruits. TOMCOT is a newcomer from France with especially large fruits which can, it is claimed, attain the size of small Peaches. GOLDCOTT is the most hardy variety of all and a good cropper. ISABELLE is the only ‘compact’ variety which has shown less vigour than other varieties. It could be contained in a large pot.
SOIL A good, well drained but organic rich soil on the slightly alkaline side is best. 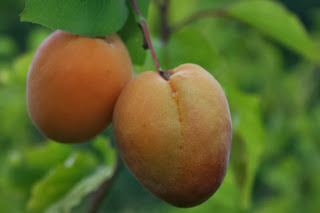