5 DIFFERENT MULBERRIES FOR YOUR GARDEN
The Mulberry family isn’t a large one so it might surprise you to learn that there are infact 5 different types of Mulberry! But as the popularity of the Morus family grows for garden cultivation so new varieties and species are constantly being sought. So for those who might be contemplating planting one of these most enigmatic of trees here’s a run down of tempting possibilities….
MORUS NIGRA KING JAMES
Or ‘Chelsea’ as it is also known. A selection of the true Black Mulberry, all stock has been propagated from the original specimen which grows in the King James physic garden in Chelsea. It is a good bearer of large, high quality and powerfully tasty black fruits. In proportion it is identical to Morus nigra, although the leaves are often larger, especially on younger trees.
MORUS ALBA WHITE BEAUTY
And here is the best selection of the famous white Mulberry. Although it is often te black varieties that garner most esteem for eating quality, white Mulberries are well worth considering. The fruits are sweeter and suitable for eating fresh [which you would never attempt with a Black variety!] and also make a nicer, sweeter jam. The fruits are ripen when they turn a delicate shade of pink. It is the leaves of Morus alba that are famously used to feed silkworms.
MORUS NIGRA
Itself the original Black Mulberry and the stuff of legends. A tree steeped in history and mystique, it is a handily slow growing and ultimately majestic specimen, when established will yield many pounds of purple black loganberry shaped fruits which are just perfect for pies, preserves, juicing, freezing and simmering to serve with yogurts or vanilla custard! The leaves turn golden in Autumn.
MORUS ALBA PENDULA
If your desire is for a tree that is as elegant as it is productive then have a look at this choice weeping white Mulberry. The branches hang down like a waterfall, densely clad in glossy shiny green leaves which turn rich golden amber in Autumn. It is alsso a reliable bearer of sweet white-pink fruits. The only problem is the foliage canopy provides an ideal refuge for pilfering feathered fiends!!
MORUS NIGRA BLACK LADY
A new selection which is short-jointed, compact and ideal for smaller gardens and impatient people! Ideally contained in a pot, where it will normally start yielding within 5 years, and sometime sooner. That’s considerably sooner than a normal Mulberry. The fruits are well flavoured and produced in profusion.
I shall resist giving growth and height projestions for Mulberries here. It’s rather a how-long-is-a-piece-of-string question. Mulberries can reach large proportions which might deter some gardeners, but really they are so slow growing they are unlikely to outgrow theyre welcome for many years. Morus alba pendula is the smallest of those mentioned here and, being top grafted, usually reaches 10' or so in time. 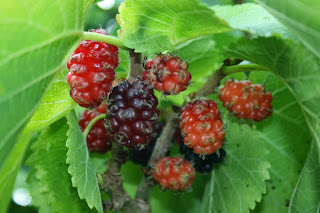