An heirloom blackcurrant ‘Daniels September’
A rare English Blackcurrant raised way back in 1923 that is very seldom seen these days.
Daniels September arose as a bud mutation of the popular old commercial variety 'Baldwin' and is considered identical to that variety in all respects excepting the astonishingly late blossom and fruiting period.
The latest of all varieties known, Daniels September is certainly aptly named for it's fruits hang in good condition on the bush until well into September. A very valuable addition to the late summer soft fruits that can be used in combination with autumn fruiting strawberries and autumn fruiting raspberries.
Daniels September is a semi-vigorous, bushy upright grower with flowers that appear late, thus usually escaping frost damage. The fruits are displayed in long trusses, and the berries are relatively large - especially for a variety of this antiquity. Flavour is good, powerful and aromatic and the fruits ripen to a deep dusky black.
Daniels September is a blackcurrant that is well worth considering as part of your soft fruit planting programme. 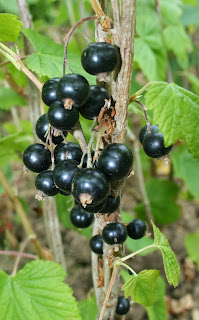