AN INTRODUCTION TO QUINCES
These desirable, mostly smallish picturesque trees make ideal garden trees and the fruits can be mightily impressive. At their largest, the huge gorgeously aromatic and fragrant golden downy pear-like fruits can weigh more than a 1ib each.
Quinces grow relatively slowly and make much-branched specimens of around 10’ or so when mature. They aren’t fussy as to soil, as long as it is not waterlogged. Although sometimes found in old orchards, they are ideal grown in the ornamental area of the garden. The large pink blossoms are very pretty, and appear in late April & May. The leaves turn a deep rich ochre gold in the Autumn and the whole tree is imbued with a certain unmistakeable character that is most pleasing.
Quince trees are easy to grow and require little or no pruning. Hardy enough for most situations except perhaps the far North. Good varieties include
VRANJA [pronounced Vranya] with it’s large pear shaped fruits.
MEECH’S PROLIFIC Apple shaped fruits, a very popular variety.
REA’S MAMOTH Which bears the most impressive and sizeable fruits of all.
SIBERIAN GOLD Smallish golden fruits and good Autumn colouring.
Quinces have been neglected for many years but are now making a comeback with renewed interest. The fruits can be used to make Quince jelly or added to apple pies and stewed apples. They ripen about Now and will keep a few weeks on a windowsill. I always like to pick 3 or 4 and put them in a bowl in the kitchen, the unmistakeable perfume and aroma fills the room! 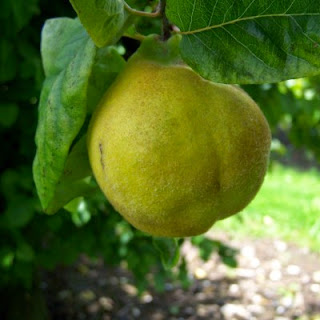