HARVESTING SOFT FRUITS – PART 2
Redcurrants should be fully coloured and are best completed by the complete bunch or at least by complete strig. Do not detach the berries from the strig until you are ready to use them as they will tend to bleed juice and quickly become sticky and unusable after only a short time. Ensure you gather the fruit whilst the berries are still shiny and sparkling. When they turn a dull red they are past their best and if some of the berries on the strigs have started to shrivel you have left them too long. They will be dry and lack the full flavour.
Whitecurrants are more difficult to judge. You might be tempted to try and pick them whilst they are ‘white’ but infact they tend to turn a deeper pinky cream when fully ripe and at their peak. If in doubt pick one or two individual berries and try them. A Whitecurrant should be sweet enough for dessert if it is properly ripe.
If you are growing cordon currants as well as bush currants, thent the cordons will habitually ripen sooner as the berries are exposed to more sunshine and warmth. So don’t assume that both can be harvested at the same time as this is seldom the case. The cordon trained currants will require your attention sooner, often as much as week earlier, especially if grown against a sunny wall.
Dessert Gooseberries must be just slightly soft and plump and fully coloured for several days according to the correct colour of the cultivar concerned. This can be white, yellow, or red. If in doubt again sample a fruit and you will soon know if it is ready. Again the difference between cordon trained and bush gooseberries will be as mentioned above.
With hybrid berries, the methodology will vary. Tummelberries are the colour of a Raspberry, Loganberries are a very dark purple red and so too are Tayberries which should be a deep purple before harvesting so the exciting flavour can develop to it’s maximum levels. Boysenberries are a very dark purple to almost black, like a blackberry. Japanese Wineberries are characteristically quite pale, a light vermillion orange to pale red. With hybrid berries it is important to go over the fruiting clusters regularly and pick what is ripe so the later berries can continue to swell, develop and ripen unhindered.
Blackberries similarly will require picking over an extended period of time as the berries usually ripen in stages. If you delay harvesting when the first flushes are ripe then the later berries may not be able to develop or ripen to their full potential. This is especially true of more modern varieties which have an extended harvesting period compared to older varieties. If you prefer to harvest over a concentrated period you might like to consider changing over to some of the older types such as Bedford Giant or Smoothstem which have quite a concentrated picking period. This can sometimes be an advantage, especially if you tend to use the fruits for processing, freezing, or jams when you might want to finalise the whole task in one or two sessions.
Always try to avoid picking fruit in the heat of the day unless you can avoid it, especially the afternoon. This is when the fruit is at it’s softest and very easy to bruise. The berries will be warm and sticky and the flavour is not as good. A bruised fruit has lost that special flavour.
It is often an automatic assumption to store the berries in a refrigerator after harvesting. This is the best option if you have to keep the fruits for a day or two but it is not the best course of action if the berries are to be used fairly soon. The flavour is preserved at it’s best ina cool room or near room temperature, not chilled where the flavour dulls and loses some of it’s vibrancy.
If you take notice of your garden friends, they will usually give you good advice. The local Blackbird population and his friends always insist that, whenever possible, soft fruit is for breakfast. Often you will find that later in the day they have moved onto other food sources. They are intelligent creatures, they know when a berry tastes it’s best, still sparkling with the morning dew.
This is when the flavour is at it’s best – why waste it? 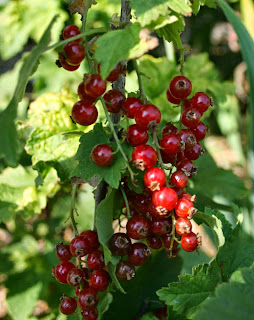