FEATURED VARIETY
The Medana Tayberry
A new hybrid berry was selected in 1980 which was to be called the Medana Tayberry. It was entirely new in that it was the first cross between a very far advanced American Blackberry called ‘Aurora’ and a Raspberry. It was hoped the extra chromosomes contained in ‘Aurora’ could be used to influence the Raspberry genes.
And so it proved; from several seedlings the remarkable Tayberry was borne.
Although in many wasy an improved Loganberry [also a BlackberryxRaspberry cross] the fruits are larger and the crop far heavier. The flavour, although intense, is sweeter and a little more aromatic. Wonderful for jams, pies, freezing, and juicing but even better eaten fresh.
The Meana Tayberry should be grown like a Blackberry with the long canes tied in against a wall or post and wite support. An area 6’ in length should be sufficient.
The Tayberry became an instant success, not only in Britain, but in America where a house in Washington State has been named ‘Tayberry House’. 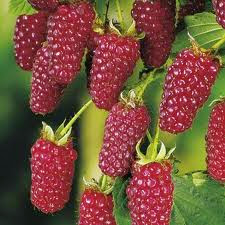