CONNOISSEURS FRUIT VARIETIES
Your guide to old, antique or unusualt fruit varieties.
Asian Pear ‘Shinsieki’
The Asian Pear, or ‘Nashi’ is literally a cross between an apple and a Pear. Shinsieki looks really like neither; it is a rounded roughly brown skinned fruit, witgh a crisp green flesh. The taste is rather like a Pear but the texture is like an Apple.
This tree is hardy and can be grown in the UK but it likes a warm position to yield well. The beautiful green white blossoms open in April and are self fertile and a tree will crop on it’s own. The crop will be further enhanced with proximity of other dessert Pear trees to pollinate. The foliage resembles a Pear and the best cultivation methods will follow that of a Pear.
The fruits become ripe for picking in early October and will store for a few weeks if kept cool in a garage or shed.
This fruit is occasionally available to buy in larger stores and is a delightfully different fruit to grow. 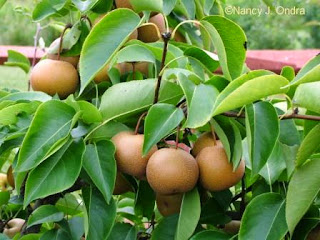