The Damson Tree is a distinct form of Plum with much smaller fruits and a powerful, sharp flavour. The taste is only for the dedicated but seems to be growing an ever larger loyal following – sales of our Damson trees increase steadily year after year!
Perhaps this is because the trees are hardier and more suited to frosty areas and Northern Localities than dessert plums. And perhaps it is because the fruit of Damsons are hardly ever available to buy.
Damsons make the most superb flavourful jam and this is the principal use for thd fruits, but they are also used in pie making, for juicing and gin or wine making. The fruits freeze very well which is as well because during years of plenty the yield can be very generous.
Damsons make relatively compact much-branched trees. Even on a vigorous rootstock the trees are easy to manage and quite closely branched. They should be cultivated in just the same way as Plums [LINK to Plum cult.guide]
Damson trees can be grown on St Julien rootstock – which grows to about 10’ and has the same spread. Or the compact Pixy stock which is much more dwarfing and can also be contained in a large pot using loam based compost. Damsons can also be grown on the newer modern column growing systems, or fan trained against a wall. Even a North wall can be utilized. Any soil will be suitable as long as it has reasonable drainage.
Harvesting should take place in the second half of September, or even October. The fruits are not properly ripe until some time after colouring. They are seldom attacked by wasps.
Varieties
There aren’t many varieties to choose from, Shropshire or Merryweather are really the two primary varieties to consider.
Shropshire Damson Is the most popular variety, being very hardy and a ‘true’ Damson. Self fertile with masses of small dusky violet-black fruits. Self fertile, hardy and easy to grow.
Merryweather is a very popular selection. The fruits are larger than the above, but sweeter so not quite possessing the true Damson character. Self fertile and reliable.
Farleigh Damson, Bradley King and the new Blue Violet are also worth considering. 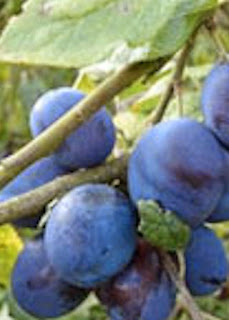