5 FROST RESISTANT PLUM TREES
If you live in the North or garden in a frost pocket then these 5 varieties of Plum will serve you well and provide a good crop most seasons.
1] JUBILEE
This Swedish raised newcomer has already usurped Victoria as the most popular garden variety. It is used to a climate much harsher than our own and has also populated much of Europe. It’s fruits are large and of very fine quality and ripen 2 weeks before Victoria. Deep red with golden flesh and suitable for dessert. Self fertile.
2] VIOLETTA
Very much a counterpart to the above, and similarly raised in Sweden, Violetta is a beautiful plum with oval dusky violet fruits with a sweet, juicy golden flesh. Earlier than Jubilee and usually ripe in early August, a heavy cropper and self fertile.
3] CZAR
An old campaigner which always does well, even in the North. Primarily a culinary Plum but is suitable for dessert use when fully ripe. Ready in late July, self fertile blue/black fruits and very prolific.
4] MARJORIES SEEDLING
Easy to grow and a useful season extender, this late variety ripens the second half of September and hangs well into October. A large rounded shiny purple Plum of fine quality, the juicy golden flesh is dual purpose and suitable for culinary and dessert use. Self fertile and a recommended variety.
5] PERSHORE YELLOW
This beautiful primrose yellow Plum is only for culinary use when it becomes sweet, juicy and more-ish! Famous for bottling, freezing jams and pies it is very hardy and does well everywhere and self fertile too. A very valuable garden tree to have.
Choose your Plum trees on St Julien stock, which is more vigorous and makes a tree of 10-14’ in height, or the dwarfing Pixy which can easily be controlled to 7-8’ and is also suitable for a large pot. These varieties also do well on the modern column growing systems. 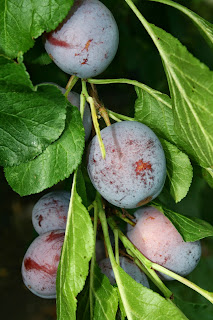