The 5 best Rhubarb varieties to grow

A rundown of varieties designed to help you get the best from these most emblematic and quintessentially English of fruiting plants for the garden.
1] Stockbridge Arrow
A more modern variety than most, and it shows in the quality of the spears, long harvesting period, and reliability. Stockbridge Arrow can be pulled from April, or in March if forced, which it can be easily with very good results. This variety has distinct arrow shaped leaves, hence the name, and the spears are not overly large but tender and prolifically produced.
2]Prince Albert
A grand old heirloom variety of more than 100 years standing. This early season variety is also known as Royal Albert or Early Albert. The sticks can be pulled from early April outdoors during normal season, are large and fleshy, juicy and pale pink. They retain a gorgeous champagne pink colouring when cooked and are very sweet – one of the very best flavours to be found in Rhubarb. A hardy, robust grower, suitable for all purposes. Plant 5’ apart. Suitable for forcing either outdoors with an upturned bin or large bucket, or with gentle heat.
3] Victoria
A favourite late variety that should be included in every Rhubarb growing garden. It extends the season by several weeks and can be enjoyed well into July, well after most other varieties have gone to seed. The sticks are deeply coloured and have a lot of flavour.
4] Timperley Early
An old standby that nevertheless remains high on the list, grown and valued for it’s vigour, quality stout sticks, good flavour and willingness to force easily. The earliest natural variety that can be encouraged to harvest from late February. The sticks are deep red at the bottom, colouring to olive green. Suitable for pies, jams, and freezing. An easy variety to grow.
5] Brandy Carr Scarlet
Red sticked Rhubarb is understandably highly sought after because of it’s outstandingly attractive colour and sweet taste. Unfortunately such varieties are usually rather week growers and only for the expert Rhubarb grower. Brandy Carr Scarlet is a stronger variety and whilst not top notch in quality and vigour, is a definite step up from others in this class. The wonderful deep red colour is retained on cooking, the taste is superlative.
Cultural hints for Rhubarb 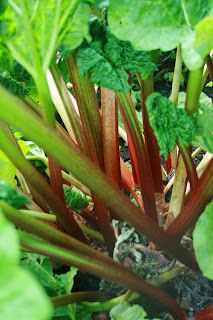 Plant 4’ apart with the ‘nose’ just level with the soil surface. Make sure it is firmed well to prevent the crowns [roots] from being heaved to the surface by frost,. Check overwinter and firm down again if necessary.
Rhubarb likes a deep well cultivated and moisture retentive soil that doesn’t dry out too much, but won’t tolerate winter waterlogging. It is often planted by the compost bins! The new crowns should not be harvested the first season and should be allowed to fully establish before being pulled.