One of the classic Greengages is the Dennistons Superb, also called the Imperial Gage. So named because it is one of the largest fruiting Greengage trees you can grow, the sizeable rounded pale green fruits ripen in Mid August and usually have a darker olive green flush on the sunny side.
Dennistons Superb is frost hardy and often recommended for the North and is one of the few Greengages that enjoys that recommendation. The fact that it is also self-fertile has resulted in it becoming one of the most popular of garden Gages. It is itself also a good pollinator for other non self-fertile Gages and Plums so ideal for incorporated as part of a collection as well as a sole tree.
The flavour is deep and rich, quite tart and pleasantly aromatic. It is suitable for dessert use if you like fruit that is intense and refreshing and it is also superior for making greengage pies and jams and freezes well.
This variety performs well as a standard tree, dwarf bush on Pixie, the newer columnar growing methods, or fan trained on a south or west facing wall. 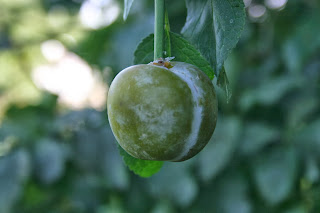