Modern gardens have seen a return to many age-old growing systems but none has become so prevalent as growing gooseberries as cordons or standards. Two widely differing methods curiously fulfill the same basic needs. Both take up much less space than a traditional bush and both are easier to maintain.
With cordons the bushes are reduced to just one or two main stems – a single cordon has one vertical, a double cordon has two in a ‘V’ shape. The small fruiting spurs come from this basic framework and a row of 6 of these can be accommodated in just a 9’ length with virtually no width required aside access for maintenance. Pruning is very easy and the cordons must either be tied to a post and wire system or supported with stout bamboo canes. Simply trim back the side shoots on the main stem[s] to 3 or 4 pairs of leaves in the winter. These are the growths that will bear the fruit.
Standard Gooseberries [also known as half-standards] look just like a standard rose with the gooseberry bush cleverly grafted onto a clear standard stem of around 3.5’. Neat and formal, they are very easy to harvest with no bending. If any gooseberry could justifiably be called good-looking then it is this! The yield is about the same as a normal bush. Sales of these standards have increased by about 50% in the last two years as they are practical and a nice feature for the kitchen garden or potager. You can even underplant them with herbs, salads of flowers. Making these standards is a very specialised procedure as the bush is actually grafted onto a Ribes aureum stem! Not something you need to worry about, just cultivate it like a normal gooseberry.
Varieties
I like to grow a mix of the old and new. Charming old heirloom varieties like 'Hedgehog' [pictured] May Duke, which suits boittling or dessert, and Golden Drop - which is so sweet it can be eaten straight from the bush, are flavour sensations. But the modern varieties have useful mildew resistance and are staples of any gooseberry growing programme. Invicta, Rokula, Jubilee and Greenfinch are first class, heavy yielding and good clean growers. 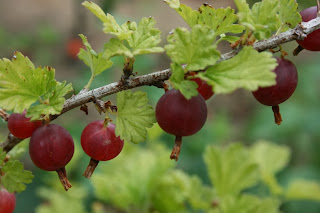