APPLES FOR THE ONE-TREE GARDEN

The majority of apple trees available need to be planted in pairs in order to produce good crops of good quality. Most are self-sterile and need the help of a pollinating partner; that’s not much use if you are able only to accommodate one tree. Happily there is a select group of self-fertile varieties that will do well as lone trees. These recommendations are reliably self pollinating varieties; it should be pointed out that less-scrupulous nurseries do sometimes list apple varieties as PARTIALLY self fertile [simply because it helps sell the tree] but in reality they seldom produce worthwhile crops. Stick to these varieties and they will provide good results. Always remember that pollination can be aided by encouraging bees and other beneficial insects to your tree. This can be done by underplanting with nectar rich flowers and herbs.
SELF-FERTILE COX’S ORANGE PIPPIN This is a distinct strain of Englands most eatable apple that has been selected not only for it’s healthier growth but also it’s valuable self fertilizing qualities. It’s flavour is virtually identical to the esteemed Cox’s Orange. Harvest late September, will store until Christmas in a garage or shed.
SCRUMPTIOUS This is the pictured variety. Scrumptious is a newcomer with rich red fruits and a complex, fascinating flavour that has been likened variously to liquorice, rosewater and cherries! A really good cropped, season late Sept-October.
HEREFORDSHIRE RUSSET The only self fertile russet. Produces fruits with a very deep, rich flavour, has a traditIonal russet taste but also with notes of true Cox.
GREENSLEEVES This must be a top choice because it always does well and is such an easy to grow variety. The clean green-chartreuse fruits have lots of juice and a clean, refreshing though sweet taste. Recommended; Limelight is very similar but a more compact tree and also self fertile.
SATURN A newcomer with outstanding disease resistance, good for organic growing. Good flavour, crisp fruits which will store. Already popular.
RED WINDSOR Bred from Cox’s and with a similar flavour, but earlier with beautiful white flesh and a highly polished scarlet skin which belies the rich flavour within. September eating. Becoming popular.
RED FALSTAFF Very frost hardy and very prolific with beautiful pink blossom. The fruits will keep and have a dense, crunchy texture similar to a Braeburn. Suitable for all areas.
REDSLEEVES A hardy and productive, easy little tree which is usually compact even on vigorous stocks. Smallish rosy red early fruits with a lovely sweet taste which keep well, especially for an early. An ideal garden variety which was introduced by ourselves.
These varieties also tend to be good pollinators for other apples as well and are generous with their pollen. So if you have a non-fruiting apple tree in your garden, or one that produces few or poor quality fruits, one of these will be likely to help a great deal.
Pictured is 'Redsleeves' 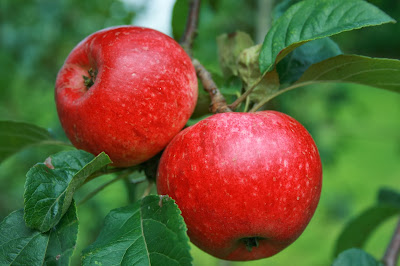